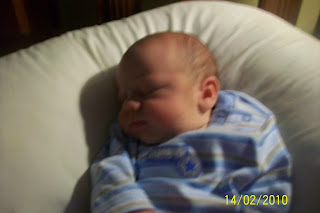 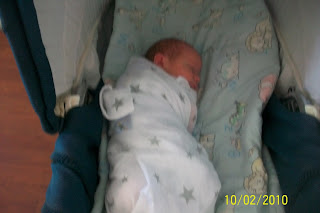 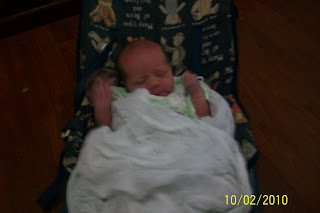 Just a quick post today. Joseph is a wonderful baby. He sleeps really well and feeds a lot through the day. I am a bit sore from breast feeding but it is improving.

Posted by Therese at 10:01 pm Links to this post

The start of lent.

Tomorrow lent starts and I am going off the internet for lent and will be turning off comments.

I will be writing posts on Sunday and putting up photos of Joseph and the rest of the family.

On the 28th of February Joseph will be baptized so I will post lots of photos that night.

Daniel started his new job yesterday. On Sunday Steve and I went down to Whyalla with him and Joseph. We were really surprised at the size of the room at the university accommodation. This photo here of Daniel and I was taken in his room. 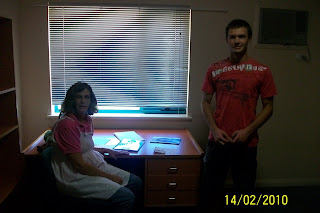 Here is a photo of Daniel and Joseph that we took on the day too. 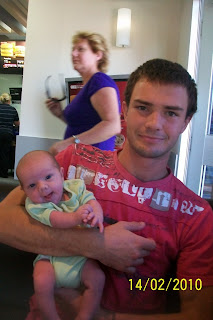 Christopher turns 5 tomorrow. We had our birthday party for him tonight. We bought pizza from Eagle Boys for tea and later we will have a birthday cake and tiramisu for dessert. I will upload photos on Sunday of him blowing candles out on his cake.

I hope everyone has a fruitful lent.
Posted by Therese at 4:55 pm 2 comments:

Today Joseph is a week old and I thought it was about time to share his birth story.

All day Saturday, I was contracting. They were mild contractions but regular so I started thinking this is the start and that something would happen Saturday night or Sunday morning.

I took it pretty easy most of the day and we went to Saturday night mass just in case we couldn't make it Sunday.

Saturday night, I found it hard to get into a real deep sleep and still had contractions for most of the night. Just after 6.30 I woke up and had a stronger contraction and felt something a bit different. I thought what was that and got up out of bed. My waters then broke. I told Steve to get up and that we would need to go to the hospital.

We got to the hospital and they monitored me for a while. I was still contracting but the contractions were not strong still but I thought with broken waters it wouldn't be long and I would start getting them.

Lunch time came and went. Still the contractions were mild. I was thinking, what the heck is going on since usually once my waters are broken labour gets going. Steve went home for a while to see what the children were up too and came back at 2.00.

We spent most of the day just waiting around for labour to start. Just after 3.30 my ob decided it was time to start some syntocin and see if that would get labour going. We then headed from the ward over to labour ward. The ob examines me and tells me that my waters in front are still intacked. I thought she meant that they hadn't broken but what had happened was they had broken behind Joseph. That was why I wasn't going into labour. The ob broke the waters in front and they started the syntocin drip slowly.

By 6pm I was in labour. The contractions were stronger than they had been most of the day but still manageable. I didn't feel as if I needed any pain relief yet.

At 7.30 the midwife examined me and I was at 9cm. Pain was pretty strong now but it was too late for any pain relief except the gas so that was what I had. I thought that because I was about 9cm that the labour would be over pretty soon anyway.

At this point, contractions dropped back a bit so the syntocin had to be increased. I don't really remember when but soon after this, they discovered that my cervix was caught on Joseph's head and that was why I wasn't moving from 9cm.

After a couple of hours at 9cm, I decided it was time to try and get into a new position. I moved around onto my knees and then soon after this got a strong urge to push. I started pushing and pretty quickly Joseph was born. I wished I had changed positions earlier.

All our other children have had pretty small head circumferences (between 28 and 32 cm). Joseph's was 35. When the midwife said, 35cm I was pretty glad I had been on my knees and had the gravity helping me deliver.

From my competition, both Jean and Kym guessed the right date for Joseph's birth. 4 people were pretty close to the weight too guessing 3685 (8 lb 2 oz). Therese, Kym, Yofed and Mary.

Congratulations especially to Kym for guessing the right date and being so close for weight.
Posted by Therese at 6:03 am 20 comments: Links to this post

Just a quick hi and

Thank you to all the people that have sent us messages and good wishes on the birth of Joseph.

It has been a long week but I am now starting to feel almost back to normal again. I have to keep reminding myself that I am 5 years older than I was when I delivered Christopher and recovery is going to take longer because of this.

Hopefully this weekend I will get back to reading blogs and leaving comments. I had over 600 new items in my reader yesterday and over 100 today so I had to mark all as read.

The messages that have been left have given me a huge boost. I am so thankful for all of you and the joy you share with us on Joseph's birth. I have some photos on my camera that haven't been uploaded yet. Once they are uploaded I will put them all up.
Posted by Therese at 11:02 pm 10 comments: Links to this post 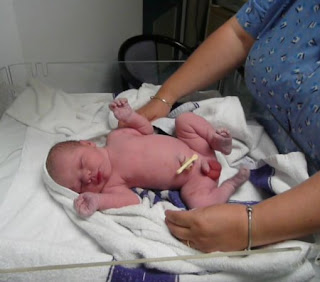 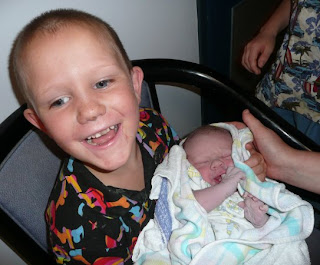 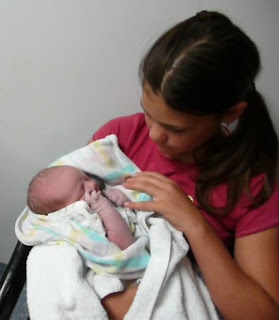 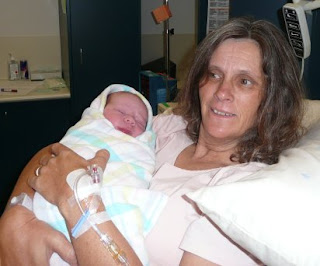 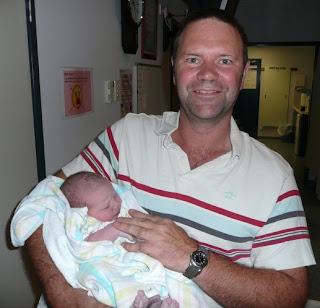 Going to the hospital.

My waters have broken this morning. I am about to head up to the hospital and see what is going on. Brigette will update as soon as baby is born.
Posted by Therese at 6:54 am 38 comments: Links to this post

You all have one guess as to what is on my mind these days. I am finding it a bit frustrating not knowing when baby will come. I just keep on saying this too shall pass. I won't be pregnant forever.

The Death of a Pope.

Today I got this book. It will be good reading while I am in hospital after the birth of our baby.

Usually this weekend would be a big cookup. I am going to cook some meals but not do the whole month. I don't want to have the pressure to get everything done and go into labour.

I have cut out a skirt and top for myself and have 5 aio nappies just about finished. I also am about half way through the second baby sling. Hopefully these will keep me occupied until I go into labour.

We have had a week of really nice weather. The temps have been in the high 20's, low 30's. This week though it will be heating up. Today is going to 33 (91)
so a little bit warm but since we have low humidity it is pretty easy to cope with. 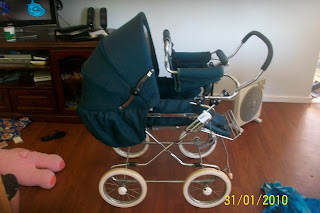 We decided to buy a second hand pusher since this is number 8. The above pusher was advertised at Coles last weekend. I read the advert on Saturday and went and looked on Sunday. We won't need the toddler seat but it came with it so I have asked Steve to take the seat off. Christopher is way too big for it and I really don't want to be pushing him around again. He is a good walker now.

Jen from Conversion Diary hosts Quick 7 each week. Drop over to read other people's quick 7.
Posted by Therese at 6:17 pm 13 comments: Links to this post 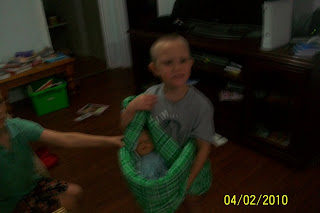 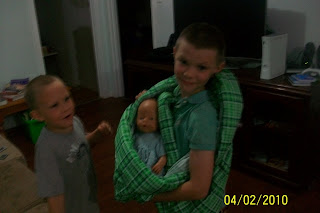 Tom with the sling 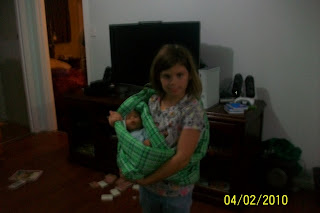 Amelia with the sling 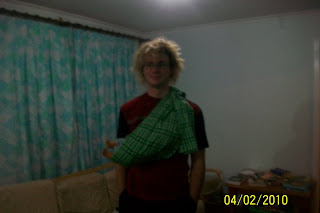 Sam with the sling. (being Mr. cool).
I got some new rings for our baby sling today so finished of the green check sling today. I still haven't done the muslin one. If baby doesn't come, I will sew it over the weekend.
Posted by Therese at 9:01 pm 12 comments: Links to this post

I think the best thing for me is to keep busy.

Here are my plans for today.

Get Christopher from Kindy.

internet.
Posted by Therese at 8:11 am 17 comments: Links to this post

Guess what we had for tea? 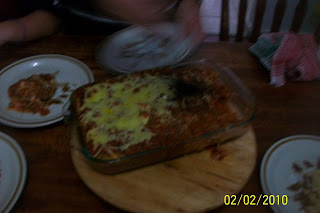 I saw my obstetrician today. Baby is still only 2/5th engaged. I think it will be a while before I go into labour. I am keeping busy though. Hopefully over the weekend I will have our little boy in my arms.
Posted by Therese at 6:45 pm 12 comments: Links to this post

Only three days till baby due. 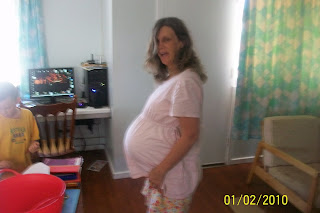 Here I am with just three days to go. 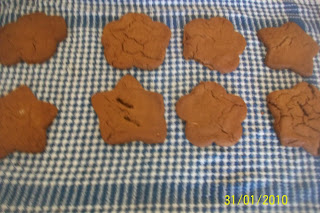 I can really taste the ginger. Brigette said that she used the extra hot cayenne pepper but I can't really taste that like I can the ginger. Since eating them, I have had contractions but nothing that is strong enough to call labour just yet.

Last week I got a package in the mail from Tracy. Lots of really nice home sewn clothes for our boy. 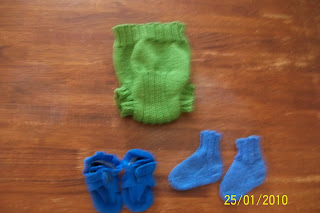 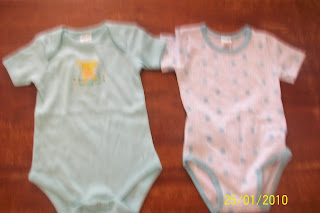 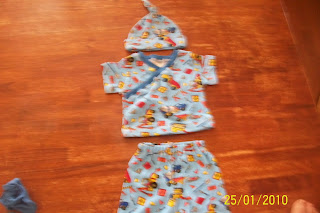 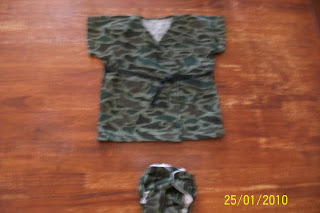 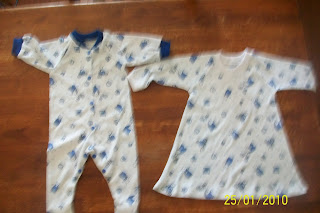 Thanks so much Tracy. I cannot wait to put some of these things on our boy. I am sure he will look gorgeous in them.
Posted by Therese at 1:59 pm 16 comments: Links to this post